Unilateral Row with Side Bridge exercise

Athletic and functional movements require a strong core consisting of the muscles surrounding the trunk and pelvis: the abdominals and the low back. These muscles must function as movers, stabilizers, and force transducers. Functional strength of the upper extremities (used in actions such as throwing a baseball) is often built initially by the lower body and transferred through the core. While it's important to strengthen these areas individually, it's just as important to integrate these areas into functional strength through total-body exercises.

Functional training programs should always include total-body exercises that facilitate core stabilization and force transmission between the upper and lower extremities. Elastic resistance exercises can create different vectors of resistance that challenge core stabilization muscles through extremity movement combined with movements such as squats or lunges. In addition, elastic resistance exercises can challenge the muscles involved in whole-body functional movements such as a lift or a push with a step. 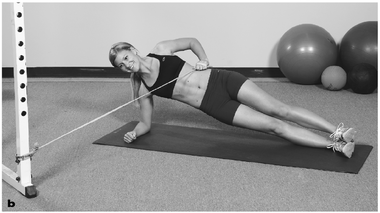 Secure one end of the band to a sturdy object near the floor. Lie on your side with your elbow directly under your shoulder. Use your other hand to grasp the band and perform a single-arm rowing exercise while lifting your hips off the floor and stabilizing the side bridge position. Slowly return.

VARIATION
Perform the side bridge while lifting your arm upward toward the ceiling with your elbow straight until the arm is vertical.